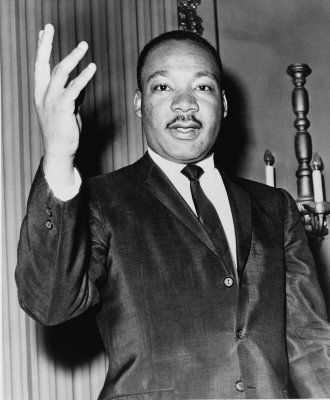 I regard Martin Luther King, Jr.’s “Beyond Vietnam,” also known as his “Declaration of Independence from the War in Vietnam” to be one of the finest pieces of writing ever produced in American English. Even though it is designed for oral presentation, he had to sit down and write it first, and it is truly powerful. American Rhetoric has an audio file of the speech and a certified transcript. Excluding the salutation, it is 6,720 words long. He delivered it on April 4, 1967, at Riverside Church in New York City – a year to the day before his assassination.

I am not going to explicate the speech here. You can read it if you like. If this is your first encounter with it, I strongly suggest taking a look. It is Dr. King’s explanation of why he decided to publicly oppose the Vietnam War, and a critique of profit-driven, materialistic society. It is an important document. Here is why I think it is important:

I’ll leave you with a trio of excerpts. The first is my favorite part – you can find it in the first 10 minutes. It is part of a long list of reasons he gives for speaking out against the war:

Perhaps a more tragic recognition of reality took place when it became clear to me that the war was doing far more than devastating the hopes of the poor at home. It was sending their sons and their brothers and their husbands to fight and to die in extraordinarily high proportions relative to the rest of the population. We were taking the black young men who had been crippled by our society and sending them eight thousand miles away to guarantee liberties in Southeast Asia which they had not found in southwest Georgia and East Harlem. So we have been repeatedly faced with the cruel irony of watching Negro and white boys on TV screens as they kill and die together for a nation that has been unable to seat them together in the same schools. So we watch them in brutal solidarity burning the huts of a poor village, but we realize that they would hardly live on the same block in Chicago. I could not be silent in the face of such cruel manipulation of the poor.

My third reason moves to an even deeper level of awareness, for it grows out of my experience in the ghettos of the North over the last three years, especially the last three summers. As I have walked among the desperate, rejected, and angry young men, I have told them that Molotov cocktails and rifles would not solve their problems. I have tried to offer them my deepest compassion while maintaining my conviction that social change comes most meaningfully through nonviolent action. But they asked, and rightly so, “What about Vietnam?” They asked if our own nation wasn’t using massive doses of violence to solve its problems, to bring about the changes it wanted. Their questions hit home, and I knew that I could never again raise my voice against the violence of the oppressed in the ghettos without having first spoken clearly to the greatest purveyor of violence in the world today: my own government. For the sake of those boys, for the sake of this government, for the sake of the hundreds of thousands trembling under our violence, I cannot be silent.

This one, a little later, identifies the problems he is really getting at (emphasis added):

And one more. One that I think we would all do well to consider, when we think about what sort of society we’d like to live in:

A nation that continues year after year to spend more money on military defense than on programs of social uplift is approaching spiritual death.

I believe it to be true.

image: public domain via American Rhetoric; the text of the speech is copyrighted by the King Estate

2 thoughts on “A Speech for the Ages”

Talk to me Cancel reply

This was once my personal blog. I post weekly at Part Time Monster and I am the admin at Sourcerer .

About Writing or by Writers